BEACHLIFE FESTIVAL has announced the schedules and details for the musical performances of the DAOU SIDESTAGE EXPERIENCE. The Fest, taking place MAY 13-15 on the waterfront of REDONDO BEACH, Calif., will feature headliners WEEZER (FRIDAY), THE SMASHING PUMPKINS (SATURDAY) and STEVE MILLER BAND (SUNDAY) as well that the DAOU SIDESTAGE EXPERIENCE which will offer foodies have the opportunity to sit on stage (literally) and be served a four-course meal by celebrity chefs while their favorite musicians perform, with the PACIFIC OCEAN in background. The DAOU SIDESTAGE EXPERIENCE is a 90-100 seat pop-up restaurant and the first culinary opportunity of its kind, located on the main stage and served by a team of award-winning chefs who create their menus alongside the artists. organize their setlists.

BEACHLIFE FESTIVAL’s eclectic beach-focused musical lineup features over 55 top artists across the spectrum of rock, indie, jam and reggae. In addition to the headliners, there will also be performances from a wide range of talent, including 311, SHERYL CROW, VANCE JOY, BLACK PUMAS, LORD HURON, STONE TEMPLE PILOTS, UB40 featuring ALI CAMPBELL, COLD WAR KIDS and many others.

Plus, hand-picked chefs who represent Southern CALIFORNIA culture will curate a truly multi-sensory festival experience. The chefs for BEACHLIFE FESTIVAL 2022 are: RAY HAYASHI of RYLA at HERMOSA BEACH (FRIDAY), KEVIN MEEHAN of KALI in LOS ANGELES and BEACHLIFE’s own Executive Chef, JACOB RAMOS (SUNDAY). This year will also offer a brunch on SATURDAY and SUNDAY, prepared by Chef RAMOS.

Another feature: MARINO MONFERRATO, VP/Hospitality Operations at DAOU FAMILY ESTATES and beloved Master of HELL’S KITCHEN since season 13, will bring DAOU wines to life during the DAOU SIDESTAGE EXPERIENCE.

CHRISTINE STAGGS from BEACHLIFE FESTIVAL said: “We believe that food and LIVE music create visceral memories for people. THE DAOU SIDESTAGE EXPERIENCE is all about creating those lasting and unforgettable memories. When you pair amazing chefs with amazing artists and fantastic wine, it just doesn’t get better!

Pres./DAOU FAMILY ESTATES, NEB LUKIC added, “At DAOU, we believe that a life well lived is created through connection. We seek to curate experiences that celebrate life through the lens of wine. Based in SoCal, a region where we have many DAOU supporters close to our hearts, the BEACHLIFE FESTIVAL is the perfect expression of art, music, food and wine that reflects our core values. We are delighted to be part of it. 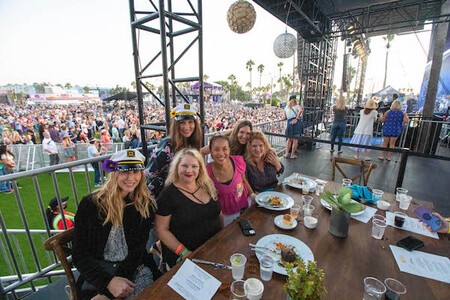 « see more news from the Net