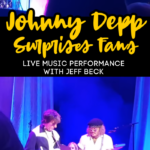 Johnny Depp fans had a blast this weekend!

There was a Jeff Beck gig in England on Sunday where he made a surprise appearance, and he didn’t just show up for the show.

He didn’t just attend the concert, he actually joined Jeff Beck on stage and performed a few songs live for the fans.

There are videos showing Johnny Depp performing “Isolation”, a remake of a John Lennon song they collaborated with in 2020.

Johnny also joined Jeff Beck in a performance of a cover of Marvin Gaye’s ‘What’s Going On’ as well as Jimi Hendrix’s ‘Little Wing’.

What a wonderful surprise for unsuspecting fans!

Johnny Depp also has his own band called “Hollywood Vampires” in which he plays guitar with music legends Alice Cooper and Joe Perry.

I’m sure the crowd was even more surprised considering that just days ago Johnny Depp was in court.

On Friday, they had closing arguments in the $50 million libel case against Amber Heard, Johnny’s ex-wife.

The jury is still in deliberation, so at this time we don’t know what the outcome of the case will be.

If you haven’t been following, Amber Heard wrote an op-ed for The Washington Post in December 2018 where she spoke about being a victim of domestic violence.

Although Amber didn’t directly name Johnny in the article, Johnny claims the article cost him his career and he wanted the record straight.

It’s been a crazy last few weeks if you’ve watched the trial!

Either way, check out the video below of Johnny Depp doing one of his favorite things… playing music!