“The Adams Center for Musical Arts is a welcoming space and venue for the Yale music community,” said Yale School of Music Dean Robert Blocker. “It was designed to enhance and enrich the creative, artistic and intellectual process of making music together. Every space – from the tiniest practice room to the magnificent ensemble rooms and student commons – has been designed to support and maintain the cherished musical culture that Yale has enjoyed for more than three centuries.

Named for Stephen ’59BA and Denise Adams in recognition of their continued generosity and support of the Yale School of Music, the $57.1 million Adams Center for Musical Arts was made possible primarily through donations Yale alumni. The complex connects a newly renovated Hendrie Hall to the previously renovated Leigh Hall by way of a new structure that is anchored by a dedicated orchestra rehearsal room and an atrium in which students from the School of Music and Yale College can to gather.

The Orchestra Rehearsal Hall, a stunning three-story sound space, is the first home the Yale Philharmonia and Yale Symphony Orchestra had at Yale. Reflecting a commitment to meeting the needs of today’s musicians, the space is equipped with a full-featured digital recording studio and advanced audio and visual technology that will allow students and faculty to connect with peers and audiences around the world. It was a facility that largely dictated the scope of the larger project.

“The need for an orchestra rehearsal room outstripped the space available at Hendrie Hall, and expansion was needed,” said Chris Couse, principal of KPMB Architects. “The orchestra’s rehearsal space should be at least as large as the stage they are performing on [in Woolsey Hall] and there were no existing spaces at Hendrie Hall that matched that kind of size. The Yale Philharmonia and Yale Symphony Orchestra are among the nation’s most respected professional and college ensembles. The new orchestra rehearsal room provides students and conductors with a dedicated space to make music.

Peter Oundjian, Principal Conductor of the YSM Philharmonic, said: “It will be an immense joy to work together in this new space as we begin a new chapter in our history. He believes that the Adams Center will “enhance the remarkable musical creation currently taking place at the School of Music.” 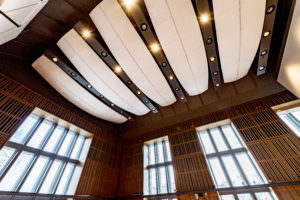 “It came with special challenges,” said Joseph Myers, president of Kirkegaard Associates, the company that designed the acoustics for the Adams Center. “We want a space that a really big band can come in and be really comfortable playing and producing really nice sound quality. And the bigger the group you put in it, the bigger that challenge. Myers said the orchestra rehearsal room “has a really nice, smooth, clean sound that I think will help rehearsals be efficient and always enjoyable.” In addition to carefully designed acoustics integrated throughout the complex, the Adams Center is equipped with $1.2 million in advanced audio and video recording systems and distance learning technology. 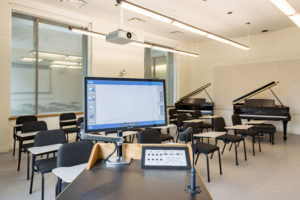 “Rooms in the new parts of the complex will feature technology enabling 21st century musicians to record – alone or professionally – use remote learning, create interactive performances, and play audio and video in every room,” YSM Associate Dean Michael Yaffe, co-chair of the Adams Center Building Committee, said. “The rooms were created with a strong digital infrastructure so the school can keep up with new technologies to improve learning and performance.” While the Adams Center for Musical Arts has entirely new facilities, it also has beautifully redesigned spaces in Hendrie Hall, including those that house Yale’s undergraduate ensembles – the Yale Glee Club and Yale Bands – and , from YSM, Yale Opera and Yale Percussion Group. The large ensemble rooms will also be used for lessons and various rehearsals. 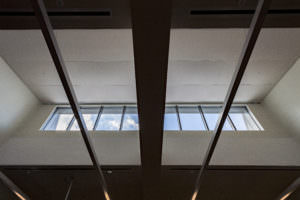 “The building is a triumph of form and function,” said music teacher and director of University Bands Thomas Duffy. “The building has a resonance of the respectable academy of the past two hundred years, yet offers the utility of the most modern facility. The band’s musicians can now rehearse in the soundproof music room without the counterpoint of trucks and passing ambulances. We have a space that will allow us to focus on conquering the challenges of music and creativity, not the challenges of the environment. The renovation of Hendrie Hall as part of the larger project of the Adams Center necessarily meant modernizing the building for its current use.” Hendrie Hall began life as a building for Yale Law School [in 1895] and was never built for use as a music school building,” Couse said. “To renovate Hendrie Hall, the building was stripped of its structure, removing all but the most significant heritage finishes.” 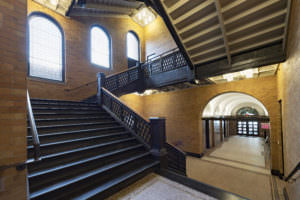 The mosaic and stonework of Hendrie Hall’s Elm Street entrance remains, as does the cast iron staircase that was incorporated as a distinctive feature in the building’s original design. Just as Hendrie Hall’s rich history has been honored, a major refurbishment of Leigh Hall has preserved important architectural features, including exterior carvings that identify the building’s original use. Built in 1930 as Yale’s health center, Leigh Hall was carefully renovated in 2005, when it was named after Mitch ’51BM ’52MM and Abby Leigh. Home to most of YSM’s faculty studios, Leigh Hall has long been the heart of the Yale School of Music.

Perhaps the most discreetly symbolic element of the new Adams Center for Musical Arts is the atrium (student common area), one wall of which was previously the north-facing exterior of Hendrie Hall. It is in this space that musicians from the School of Music and Yale College can gather and interact.

“The opening of the Adams Center is a defining moment for the Yale School of Music, the Yale College ensembles who have resided at Hendrie Hall for decades, and the entire extraordinary music community at the university,” said Block. “From traditional spaces to new digital frontiers housed in the Adams Center for Musical Arts, the rich legacy of music at Yale will be upheld and shared around the world.”